“Amazing things are happening”: a picture of the Africaday 2016

After several warm Africadays the last years, this year the Africaday started a little different. It was one of those typical Dutch rainy and windy autumn days. Nevertheless, the Royal Tropical Institute (KIT) in Amsterdam rapidly surged with visitors who didn’t want to miss out anything of the exciting programme. At 10 AM the opening started, and, fortunately, the KIT was nice and warm by then. “Reframe the narrative on Africa, amazing things are happening!”

The day was officially opened by Arjen Berkvens, director of the FMS, followed by a welcoming word of Vassilis Ntousas from the Foundation of European Progressive Studies (FEPS), co-organiser of the Africaday. This year, the relationship between Europe and Africa was the central theme of the Africaday. According to Ntousas, Africa, and especially the African youth, has a “vast potential and opportunity”. Then, the floor was given to the first keynote speaker of the Africaday, Member of the Dutch Parliament, Amma Asante (PvdA, speech was in Dutch): “let’s try together to warm the cold climate against refugees”.
The other keynote speaker of the day was introduced by Mark Schneiders, CEO of KIT: the young and inspiring entrepreneur Ashish Thakkar. Already at a very young age, Thakkar started his business, what has grown into what is now known as the Mara Group. He also initiated the Mara Foundation for young entrepreneurs. His key message pointed out the need to change the story about Africa: Africa is a continent, not a country, where amazing things happen. That perspective requires our focus: “We have to write and tell our story!”.

After a short break, there was still some time left to continue the inspiring talk with Thakkar. He once again emphasised the need for change: “There needs to be a true partnership between Europe and Africa. Development is a crucial element, but we are also a trade destination. That should become stronger”. 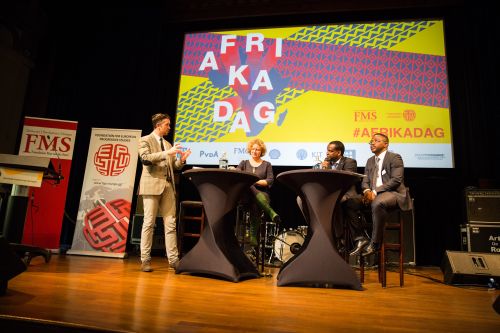 During the high level panel ‘Future of EU-Africa relations’ that followed the keynote speech of Thakkar, this was also an important topic. According to Judith Sargentini, Member of European Parliament for The Greens, Africa is often seen as a producer of immigrants, and all other relations are linked to this role as producer. Sometimes, trade with African countries is blocked, because these countries refuse to readmit their emigrated nationals. According to the Ambassador of Rwanda in the Netherlands, Karabaranga, you can compare relations between countries with a marriage: “you need the same understanding and the same goal”. In the past, relations between Europe and Africa had too often a paternalistic nature. “We cannot talk about aid, without consulting Africa”, said the Ambassador. Philip Bob Jusu, representative of the African Union, added to the argument of Sargentini that: “Africans going to Europe are seen as desperate. Europeans going to Africa are seen as philanthropists”. Too often, the African Union is approached in a condescending way from the EU-side. Therefore, Jusu sees a role for the EU to strengthen the African Union.

Meanwhile, the workshop of the Dutch Ministry of Foreign Affairs started at the ‘Kleine Zaal’. Dutch rapper Typhoon and the reggae artist Sams’K le Jah from Burkina Faso discussed about the ways artists can initiate and contribute to social changes. The Ministry supports such initiatives in Africa: “We are not trying to do something extraordinary, but to help to create space”, explained Mirjam Tjassing from the Dutch Embassy in Bamako, Mali. For example, Sams’K le Jah and rapper Smockey represented the youth movement Balai Citoyen, which ultimately led to the resignation of President Compaore after 27 years. They encouraged the youth to use their voting pass as their weapons against the regime. 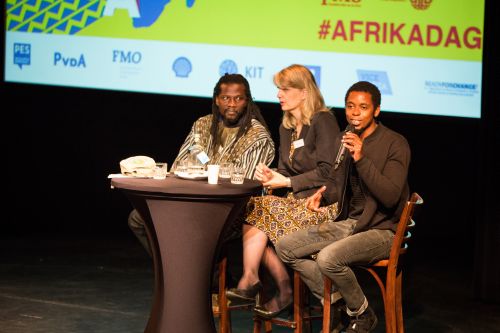 From a personal perspective, Typhoon knows that words can be very important as well. According to him, there is a large freedom of expression in in the Netherlands; it might even be too much: “With a full mouth you cannot play the flute”. On the other hand, Typhoon believes that first something violent has to happen before we in the Netherlands can come closer to each other.

The struggle against discrimination

After the lunch break, Deputy Prime Minister Lodewijk Asscher started his workshop, organised by the Party of European Socialists (PES), on the fight against discrimination in the Netherlands. Although the anti-discrimination principle is at the top of the Dutch Constitution, many are still too often, unconsciously or sometimes on purpose, discriminated. Even so, Asscher ended his speech (in Dutch) with a positive note: “A lot still needs to happen, but we are heading towards the right direction!” Amma Asante indicated the very important role that education plays here. Although, many young people with foreign origins are studying at colleges and universities in the Netherlands, it continues to be very hard for them to also integrate at the labour market. Mitchell Esajas (New Urban Collective) agreed with Asante. Youngsters with foreign roots are three times more often unemployed as youngster of the same age with Dutch roots. Anonymous application procedures could be a good instrument to fight this phenomenon, but it is probably not yet the best solution. “Discriminating companies and individuals should be fought more strongly to solve the problem of discrimination on the labour market”, according to Esajas. 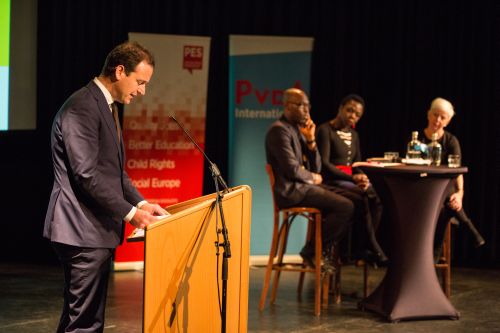 EU-Africa migration: “If we don’t act, who will?”

Diederik Samsom, political leader of the PvdA, opened this workshop. Although EU-Africa migration is not a new phenomenon at all, it is now time “to address the challenges and create perspective”. People don’t choose to be a refugee, but are forced to through circumstances. We can and must do more for those refugees, starting with the establishment of safe migration routes, according to Samsom. Eduard Nazarski, director of Amnesty Netherlands, added that “we should take out the trade”: we must prevent that human traffickers can take benefit of the situation. Kostas Triantafyllos, International Secretary of PASOK (Greece), admired Samsom for his role in the EU-Turkey deal. At the moment, Turkey is an important factor, but only a few refugees return to Turkey. According to journalist Ayaan Abukar, “Fortress Europe” is the reality. But creating jobs there, in Africa, will not help to prevent people from migrating. 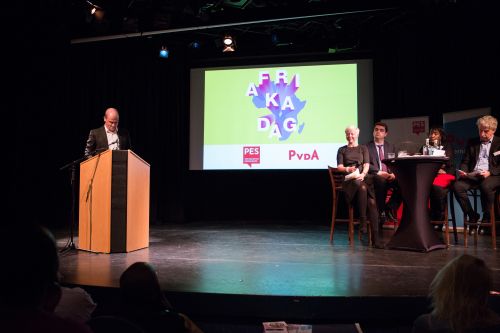 A new element to this year’s programme was the extensive cultural program. Yangambi organised a special edition of the iAfrica Festival, with literature (writers Babah Tarawally and Alphonse Muambi), the Ethiopian film “Lamb” and several live performances. Although, the ‘Grote Zaal’ was not a real dance hall, people kept constantly swinging and dancing on the music of Augustina, Badi and Thaïs Diarra. A successful closure of this day at KIT! 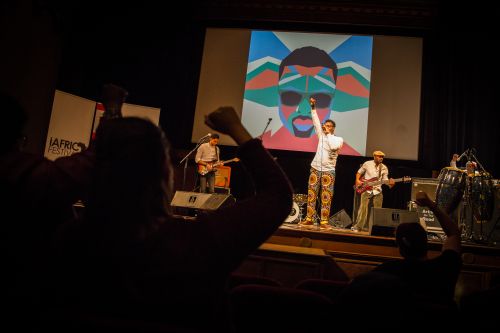 Again, so many other things happened. With over 40 workshops, there was more than enough to do for everybody. Several politicians were present as well as people from the African diaspora, students, entrepreneurs, writers, artists and many more. During the lunch, many people enjoyed the delicious African lunch, despite the queue for it. After an inspiring day, full of discussions and workshops, Africaday visitors finished their day with the swinging after party “Africa at Night” in Desmet Studio’s. People danced all night on the African beats!

The FMS would like to thank all visitors, partners, participating organisations, speakers, volunteers, artists and caterers for this great day. You can find all the pictures of the event here . Hopefully we will see you (again) next year!