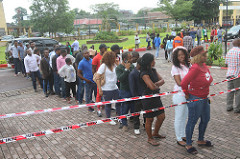 On the 10th of January opposition candidate Felix Tshisekedi was announced winner of the Congolese presidential elections. After an extensive ruling period by President Kabila (since 2001), the election of an opposition leader could be a step in the right direction for the Democratic Republic of Congo. However, Martin Fayulu, a second opposition candidate, claims the elections were rigged and that he is the true winner. Several pieces of evidence support his claim. A year ago, Foundation Max van der Stoel talked about this subject during the political café on the (non)sense of elections in Congo. Here we discussed that the result of new democratic elections could be the first peaceful transfer of power since independence in 1960.

In December 2018 the Congolese people finally got a chance to vote in new general elections. Officially this should have happened more than two years earlier, when the mandate of the Congolese president Joseph Kabila was supposed to end. However, he managed to extend his term while trying to get the constitution to change. This sparked many protests within the Democratic Republic of Congo. These were violently shut down, resulting in many casualties.

Elections finally took place on the 30thof December 2018, with three main candidates running for president. President Kabila was ineligible for a third term. Therefore his party, the People’s Party for Reconstruction and Democracy, supported the candidacy of Emmanuel Ramazini Shardary. At first, the opposition support went to the nomination of Martin Fayulu. However, two opposition members broke this agreement and started their own campaign. This brought Félix Tshisedeki forward as candidate, who eventually won the elections.

Election day, Sunday the 30thof December, did not take place without challenges. The new electronic voting machines failed in several polling stations. Directly after the polling stations closed, it was generally believed that Martin Fayulu had won. The Catholic church had conducted polls during election day by installing more than 40 000 observers within the voting stations and these observers concluded that Fayulu had won with more than 60% of the votes.

Yet, Kabila was not about to go down without a fight. He had tried everything to let Shardary win. When Kabila realised his party was not able to win the elections, he made a deal with Tshisekedi, according to Fayulu. Within a few days after their conversation Tshisekedi was suddenly very positive in his remarks regarding the former president, while being highly critical of him before. When on the 10thof January official results finally came out, it was announced that Felix Tshisekedi had won with 38 percent of the votes.

Another incident pointing towards corruption was the fact that large districts showing support for Fayulu were excluded from voting due to an Ebola outbreak. At the same time the schools and government buildings in the area remained open. There was a big chance that a high percentage of those 1,2 million votes would have gone to Fayulu.

Martin Fayulu has called the results an “electoral coup d’etat” and asked the Congolese people to rise up and fight the outcome of the elections. He and his supporters now demand that the votes will be recounted. However, people are also aware of the significant fact that an opposition leader has won. This can be seen as a step forward as the family of Tshisekedi has opposed the Congolese presidents for decennia. This makes his positive attitude towards the former president even more suspicious. At this moment it is unclear whether Tshisekedi will become president. The camp of Fayulu hopes the elections will be declared invalid. The next few weeks will tell us whether the government of Congo will actually change or Kabila will remain in control.